Today I will share with you another part of our journey through Puerto Rico. After few days spent in the South visiting Ponce, coffee plantations, and dry forest, we moved towards the Northern part of the West Coast, concretely to Luquillo. There is not much to do and see in Luquillo, but there are some nice beaches and it lies just a few minutes’ drive from the El Yunque National Forest.

In Luquillo, we stayed at Casa Luquillo Beach, right at the La Pared beach, just across a calm street. Upon our arrival, we were welcomed by Veronica, half German and half Puerto Rican, her husband and their baby. We had a nice short chat with them about life in Puerto Rico and received some useful tips for our stay. I loved our mornings and evenings spent at this house, taking our homemade breakfast or dinner on the terrace listening to the waves and watching the surfers. 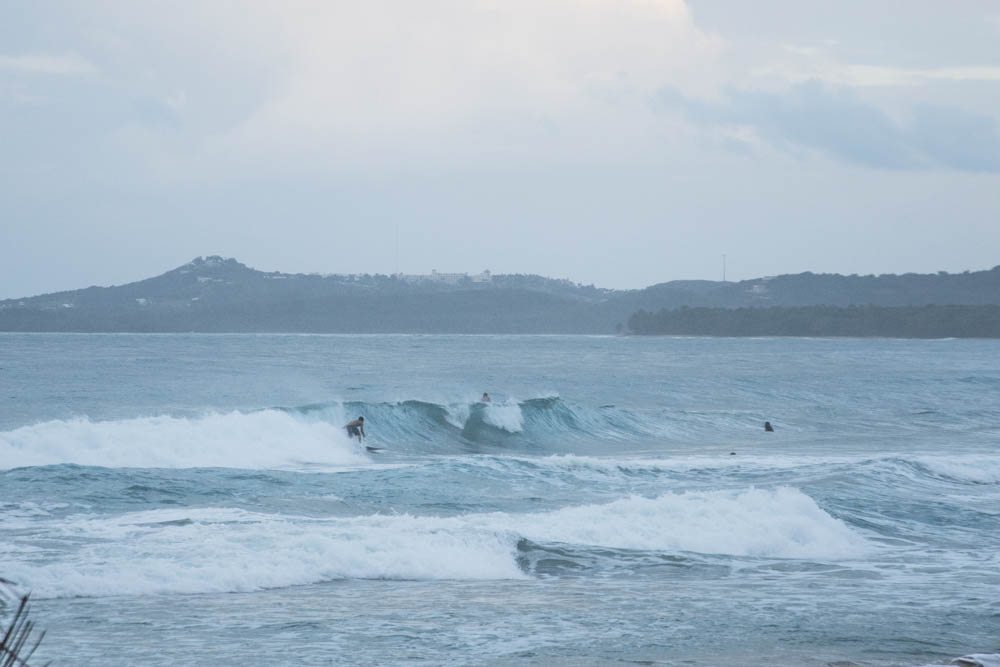 We spent the first two days on the beach just in front of our house. La Pared is a nice yellow sandy beach with palm trees and a grassy area providing some shade. Sometimes it may happen that swimming is impossible here when the waves are too strong. I had a swim just once here and it took me hard work to get over the strongest waves. But even a short rest on the beach while enjoying the natural beauty here is worthy. Due to huge waves, this beach is ideal for surfers and you can also take some surf lessons here if you want. 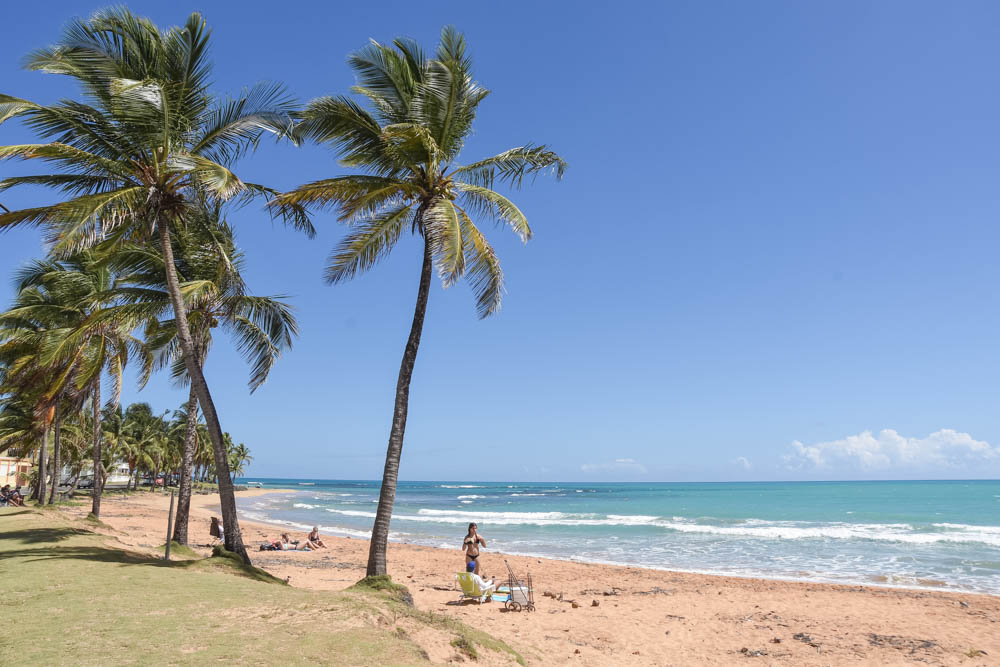 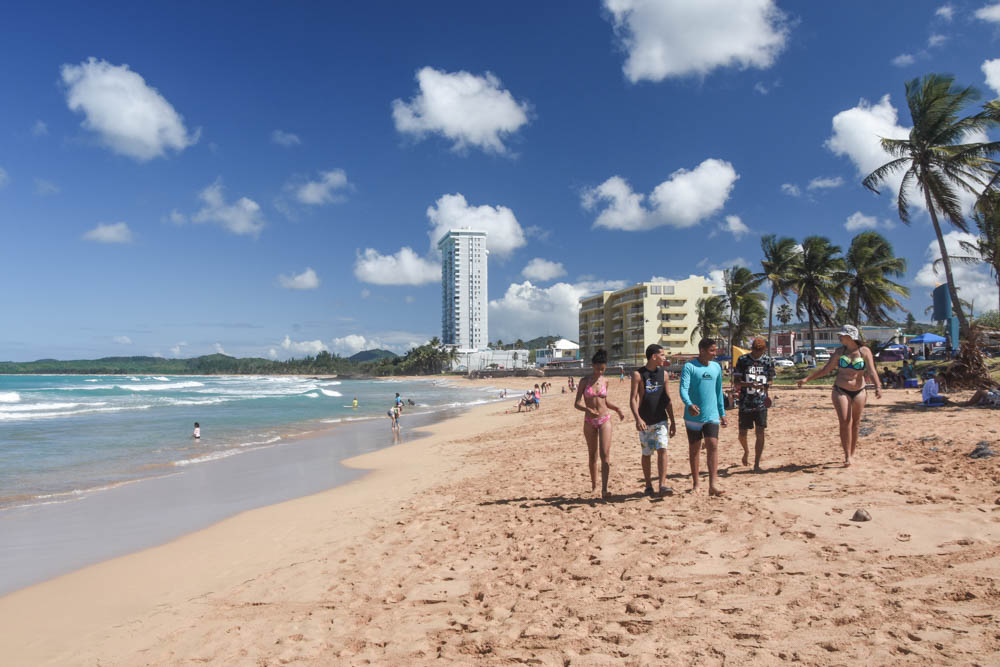 Our plan was to visit El Yunque National Forest during our stay in Luquillo because it was just a short drive from there. El Yunque is the largest rain forest in the Caribbean and the only one in the whole US and as such, an unmissable thing to do in Puerto Rico for nature lovers. Unfortunately, we did not book any organized trip in advance as we planned to go alone. There were no cars available for that day at the car rental, neither there was any public transport to El Yunque, nor taxis that would agree to leave us at the starting point where we wanted to get to. I was already stressing, but it was just a coincidence when somebody gave me a business card of Island Vacations Concierge. And so I called. Hector answered the phone and arrived in 5 minutes to discuss in person. He had my age and seemed to be a very nice and cool person. He proposed to take us there, guide us through the trail of our choice, and then drive us back to Luquillo.

The other day Hector arrived as agreed, it was around 8:30 when we left. In about 20 minutes, we were already inside the rain forest, breathing fresh morning air. He took us first to the lookout tower to see the mountains and how vast the rain forest was. Then we passed around the Coca falls and consequently drove again up the hill to the starting point of our trail. During the walk, we were mainly talking about the life in Puerto Rico, the people, and their culture, but also about history and food with Hector. 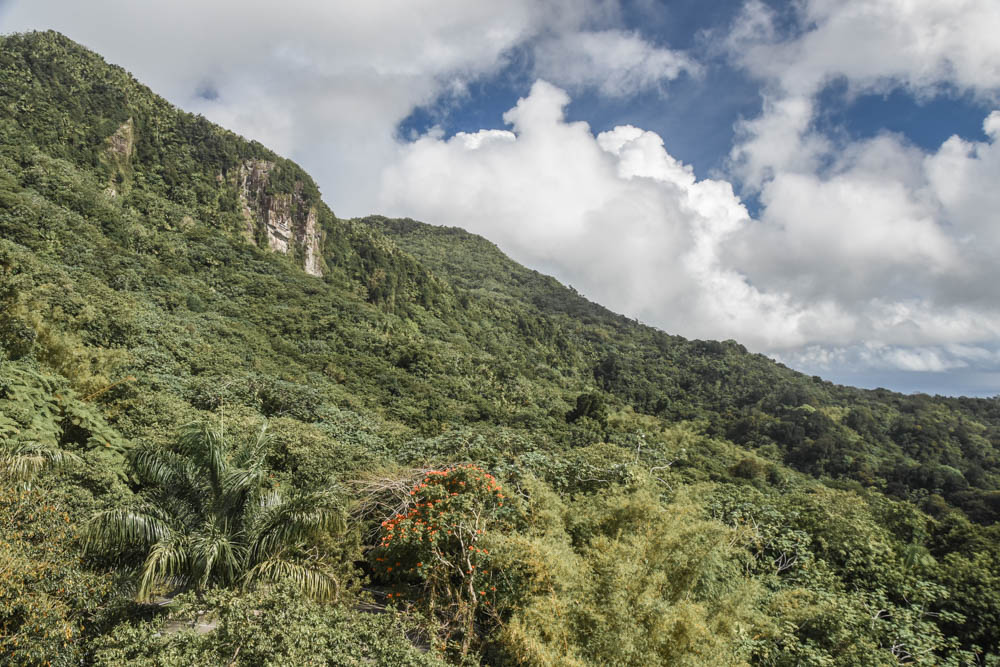 You can choose from several walking trails in El Yunque. As a compromise, we chose one of the most popular one, La Mina Trail. It was about 45 minutes to the La Mina Falls where already many people had their bath by that time. We then continued the walk back to the road, approximately an hour. Alongside the path, there were some informative boards telling about the rainforest ecosystem, its inhabitants and how it all works. Very interesting read, although I skipped many because the guys were walking fast and I did not want to get lost. 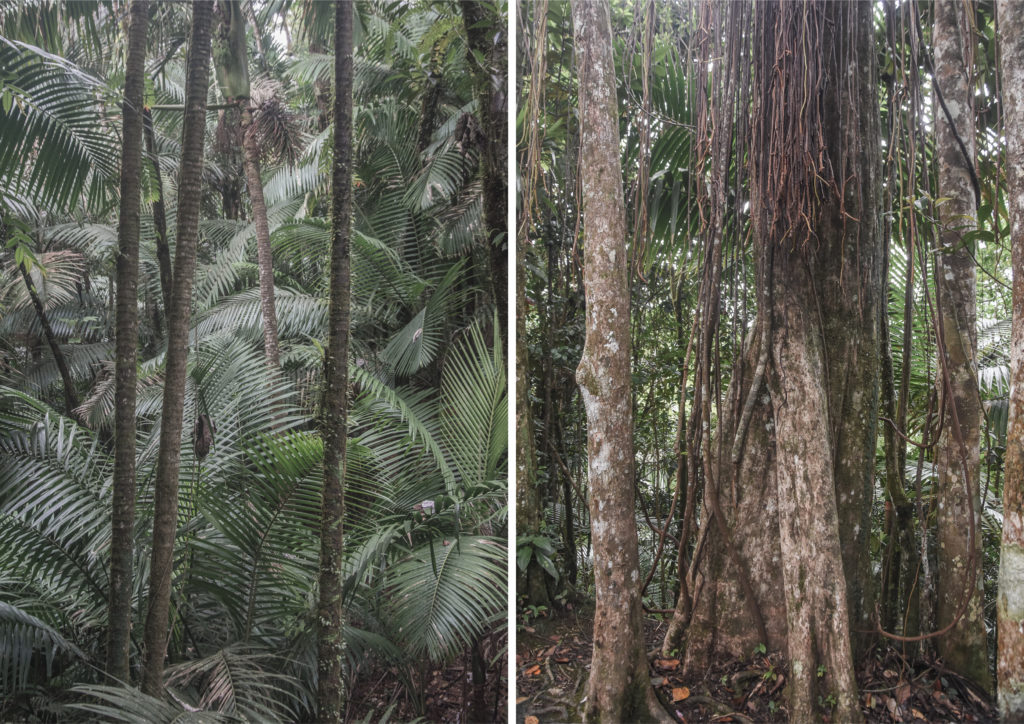 The paths in the forest (or at least the one we took – La Mina Trail) are well maintained and suitable for people of different physical conditions. There are no dangerous animals living in the forest, this is a reason why I wanted to visit this forest as elsewhere I would be scared of snakes. Many unique plant and animal species live here though. For example, the Puerto Rican Parrot who is one of the most endangered birds in the world or the tiny frogs called coquís that became the symbol of Puerto Rico. 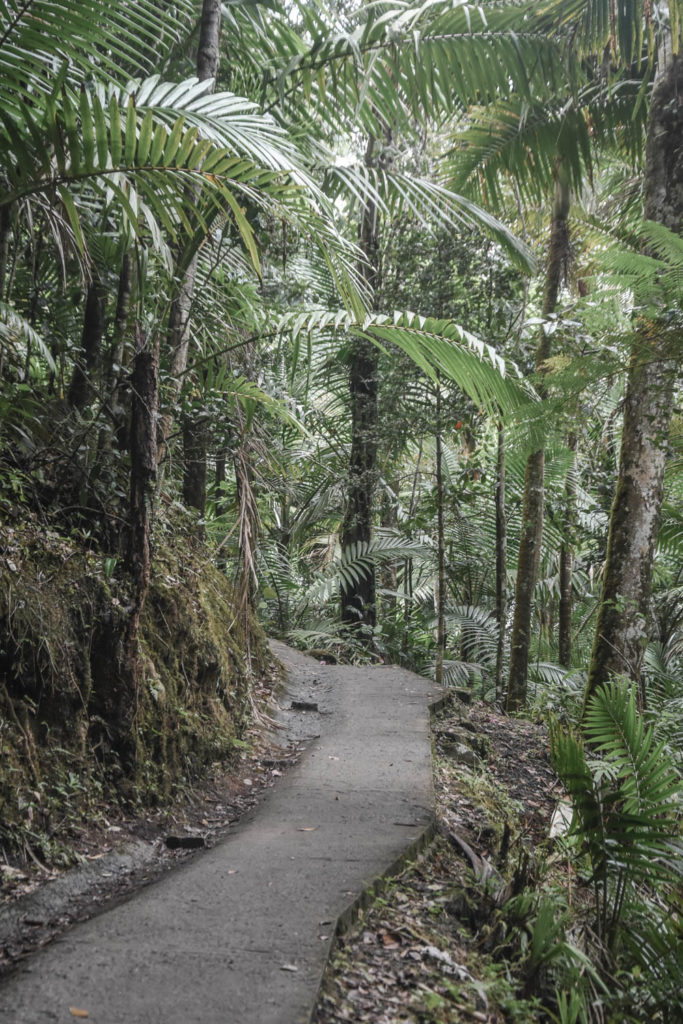 Once we got out of the rainforest, it started to rain heavily. Hector turned out to be a musician too. Later we googled the band where he plays, it is called Orchestra Macabeo and I directly felt in love with that music. Just check out some of their videos on YouTube! 🙂 If you want to visit El Yunque and you are not looking for a licensed tour operator, don’t hesitate and get in touch with Hector, he is such a nice person that I won’t hesitate to recommend!

While it was still raining once we got back to Luquillo, we ate at Ernestina’s. We got a dorada with tostones (fried plantains). It was nice except the grayish vegetables with no taste. 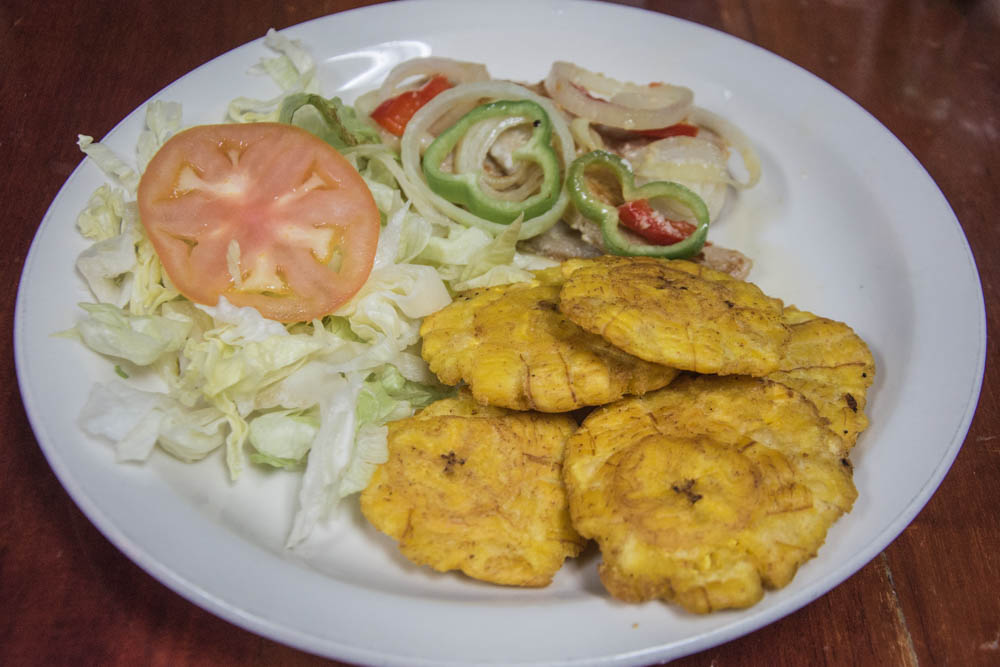 After we ate, the rain was finished so we took the advantage and had a walk in the town to see some of the colorful murals.

The surfers were back in the water, enjoying few minutes before it started to rain again heavily for next hour or two.

“After-rain” walk to the Monserrate Beach

In the later afternoon, it finally stopped raining so we could go for a walk. One of the best beaches in Luquillo is the Balneario Monserrate, often called Luquillo beach. And so we decided to check that one out – it was about 40 minutes’ walk alongside the beaches such as the Playa Azul beach, Punta Embarcadero and Punta Bandera. The sky was still cloudy when we arrived at Balneario Monserrate and the beach was almost empty, so I can’t really tell you if I liked it or not otherwise it wouldn’t be objective. But what I can tell you is that this beach is government-run and so it is rather clean and you have a parking, restrooms or showers at your disposal as well as some food stands (kiosks). I think that in a sunny weather, it can be cool out there. 🙂

The last day before leaving Luquillo, I got up early morning to take a walk on the other side to the La Selva Beach and beyond, which is a kind of wild nature beach and a nature reserve area where the only visitors are sea turtles and few surfers (and dogs according to the footprints in the sand). It was a beautiful morning after all night rain, the air was so fresh, I met nobody during the whole walk on the beach. I felt so great and enjoyed every minute of that walk. Unfortunately, after about an hour and a half of this amazing walk, I had to be back and pack my stuff for the next stop… 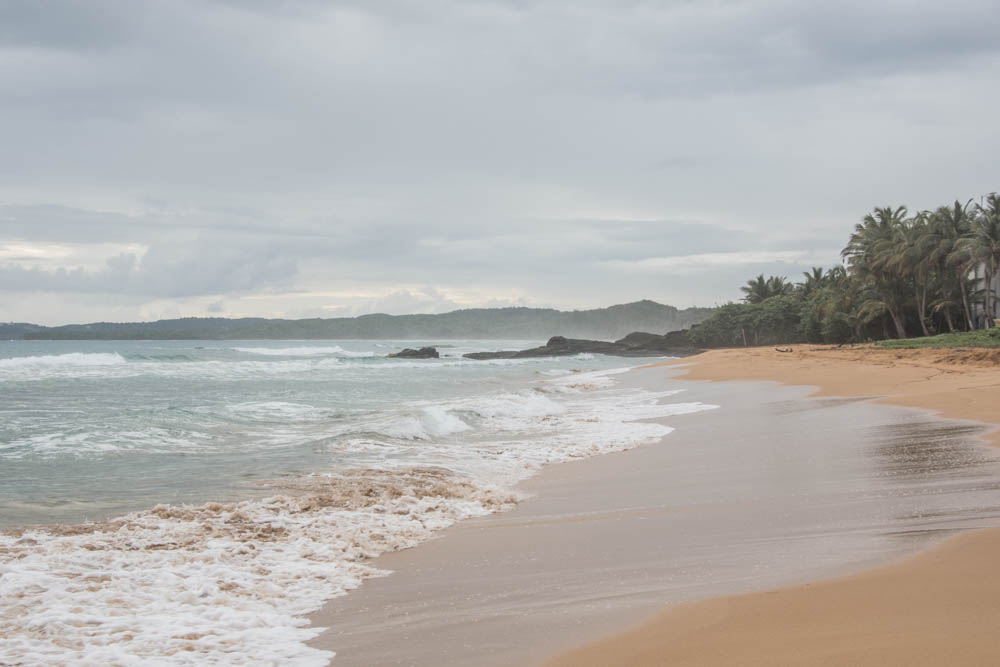 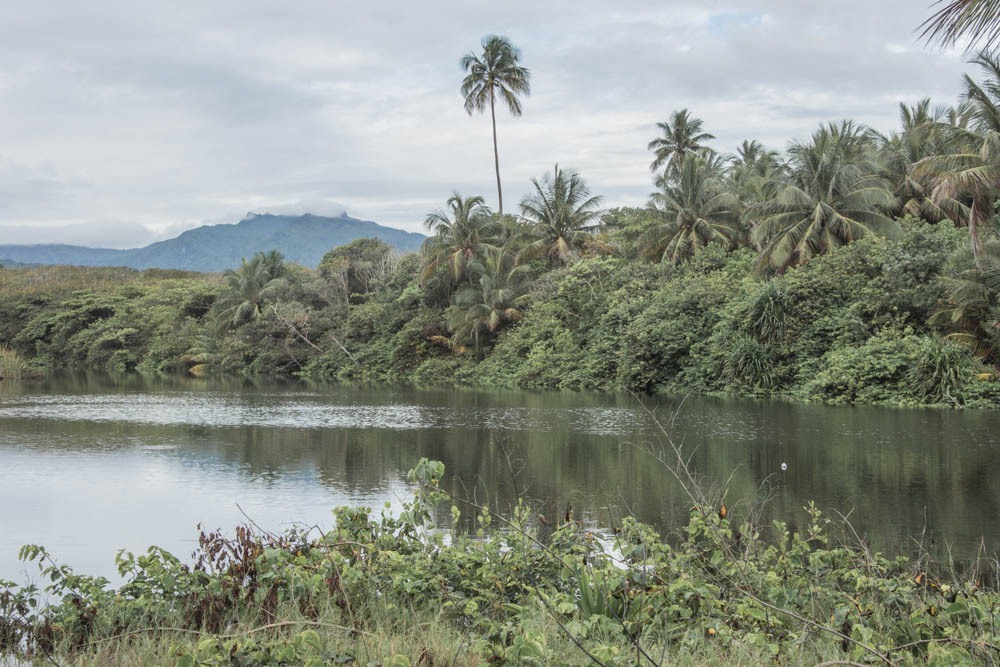 Thank you, Luquillo for sharing your serenity with us!

Have you visited Puerto Rico? Did you go to Luquillo or El Yunque? Have you visited any other rain forest somewhere else? Tell me about your experience in the below comments! 🙂

Green Corner in My Home