By the end of November 2018, we spent 5 days in Malta. It was off the main season, so much less touristy but also not too warm to do a road trip to enjoy nice towns as well as the landscape which is exactly what we like! The idea was to escape somewhere to catch some last sun rays before the end of the year and to slow down and rest before the Christmas marathon. And also, as I was 5 months pregnant, this was our babymoon. We found last minute flight tickets with Ryanair from Charleroi to Luqa and booked our accommodation via Airbnb just a few days in advance. I can say that our autumn visit to Malta was marvelous and beyond expectations. So I’m thrilled to share our itinerary for 5 days in Malta with tips on what to see and do on the island in November with you guys.

As you may know, the Maltese archipelago consists of 3 islands: Malta, Gozo, and Comino. We decided to stay in the main one, Malta, and do day trips from there. Many visitors stay in Sliema close to Valletta which is a busy business center of Malta with many bars, restaurants, hotels, and shops that have great public transport connections to the rest of the islands. This is something we wanted to avoid as we live in a big city and that’s why we opted to stay in a beautiful AirBnB in the center of quiet Rabat, just a 5 minutes’ walk from the “Silent City” (M’dina). It showed up that Rabat was a really good choice for our 5 days in Malta!

Etienne’s house is 400 years old, located in probably the most beautiful street in Malta. It is a fully equipped apartment that is decorated with such a good personal taste and a new apartment is in the preparation. There is also a terrace where you can have a nice breakfast or even dinner. Besides, the owner is such a nice, friendly and helpful person. Very open and rich in travel experiences and so we always had a great chat with him. Prior to our arrival, he sent us plenty of useful information and always replied very quickly.

How we got around

The most visited places in Malta are well connected by bus. We took it from the airport and also to visit Valetta but for the rest of our stay, we rented a car at the airport. Remember that if you rent a car, you should be an experienced driver, for two reasons. First, in Malta, they drive on the left so it might take some time to get used to it. Second, the roads and streets are often in bad condition and it is so easy to damage the car.  Some rental companies know that very well and take advantage of it against you once you are giving the keys back to them. So really carefully examine your car and take pictures, tell them about any single scratch on the car before you drive out and then watch out during your drives!

Our 5-day Itinerary in Malta

After our late arrival at night, we woke up quite late by the sun rays that we let in through one open window. We had a late breakfast on the terrace, enjoying the floral decor and sun before heading to the old walled city of M’dina. We spent there the whole afternoon just getting lost in the little old streets, admiring the old houses and walls, enjoying the views from the walled city, exploring the surrounding garden, visiting some crafts shops and taking pics of this old and charming place. For dinner, we went to Coogi’s restaurant where they had plenty of choice in vegetarian and vegan food as well. Later in the night, we walked through the streets of M’dina which had a magical atmosphere and we could finally understand why it’s called Silent City. The streets were completely empty, the atmosphere was serene and peaceful. 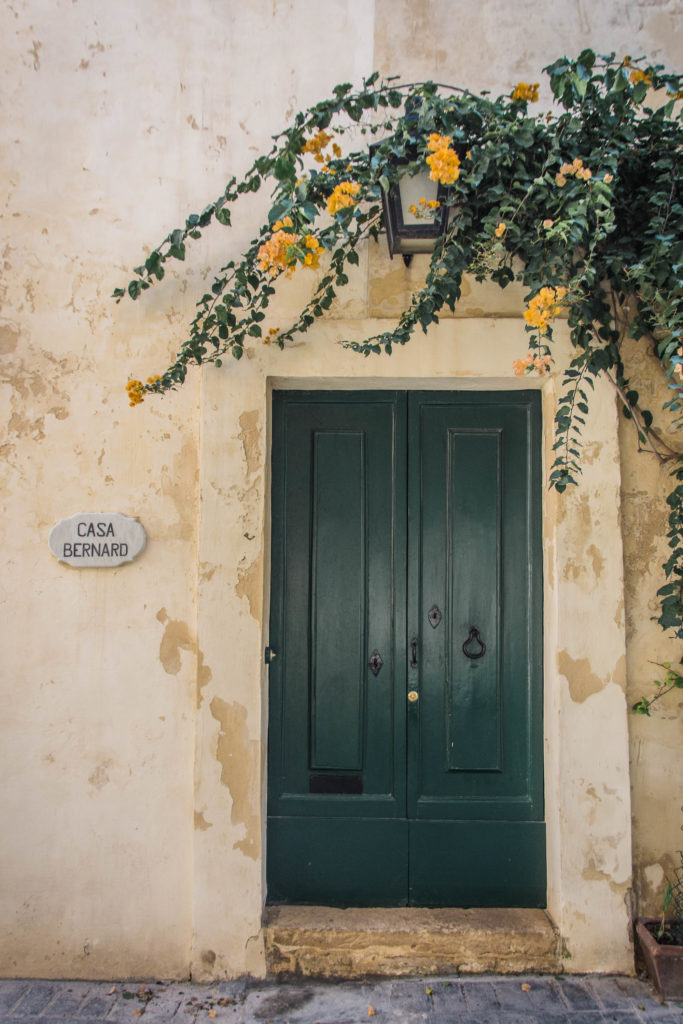 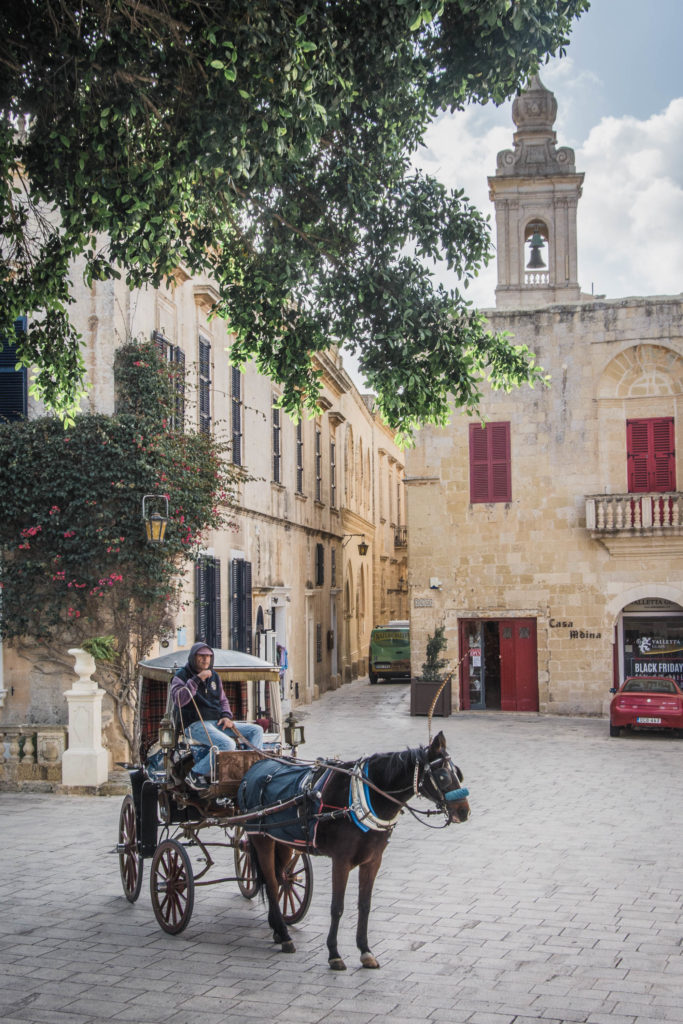 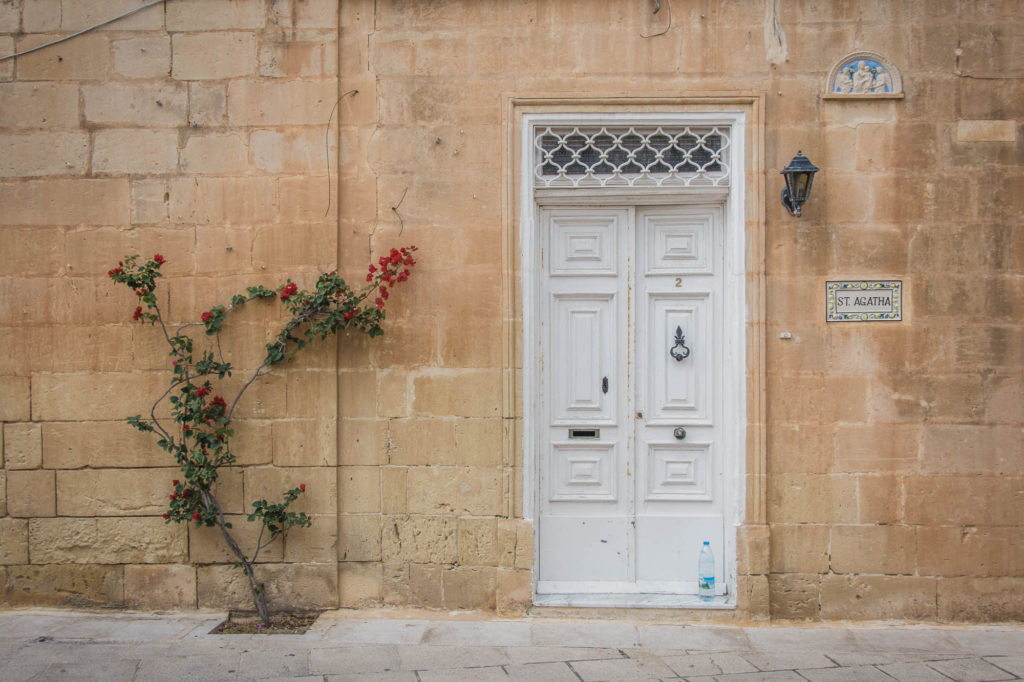 In the morning, we took a local bus and headed to the capital of Malta. The drive was about 30 minutes and cost less than 3 euros per person. We first decided to visit St. John Cathedral which interior is impressive as it contains several works of Caravaggio. Later we walked up towards the Upper Barakka Gardens to enjoy a nice view over the Three Cities. There we also tasted the pastizzi for the first time (typical Maltese salty snack: a filo-like pastry with cheese or peas filling). From there, we went to check out the harbor beneath and followed the way to the Waterfront which was rather empty so we went back to the city center and to hang in the typical streets of Valletta with colorful balconies.

Later in the afternoon, we took a ferry to Sliema, but I’d say for us it was worth just for the view of Valletta from its shores. We did not really enjoy Sliema – it is rather a modern and business place packed with shops, restaurants, and bars – and so we quickly took the ferry back to Valletta.

In the evening, we went for dinner to Pizzeria Sotto, which is supposed to be one of the best pizzerias out there. And the pizza was truly delicious and the service very nice! From Valetta, we took a bus to the airport where we rented a car for the rest of our stay. 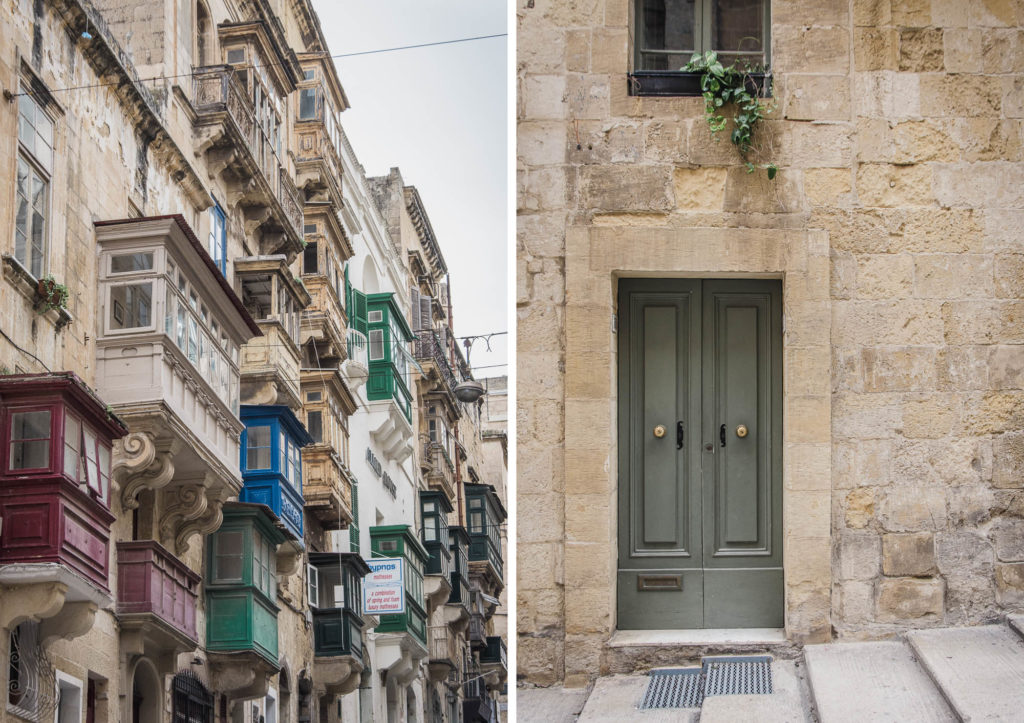 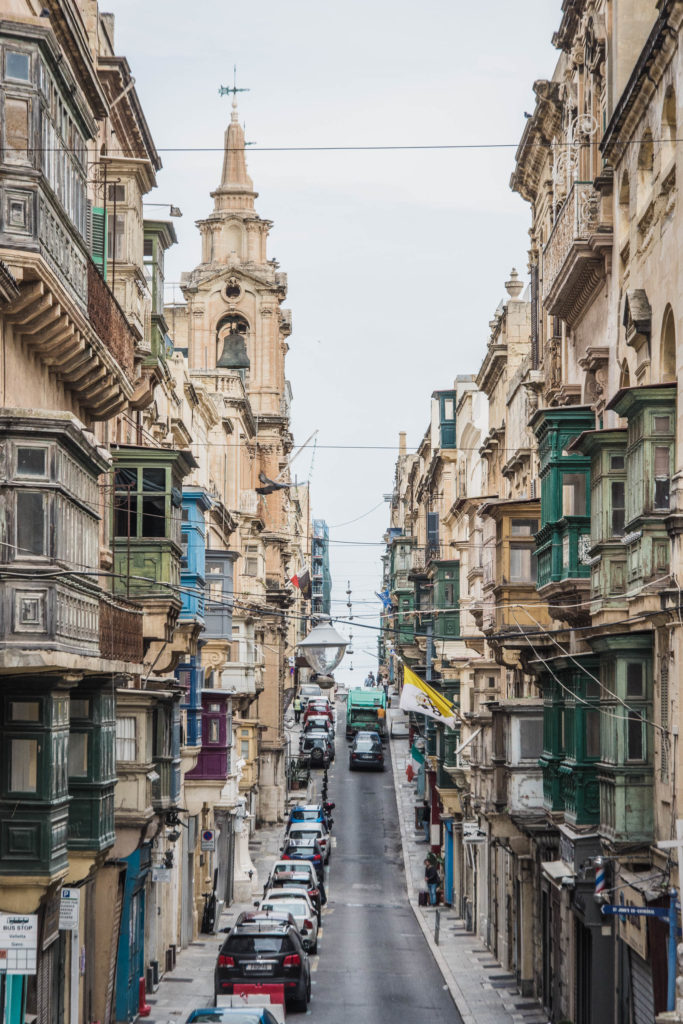 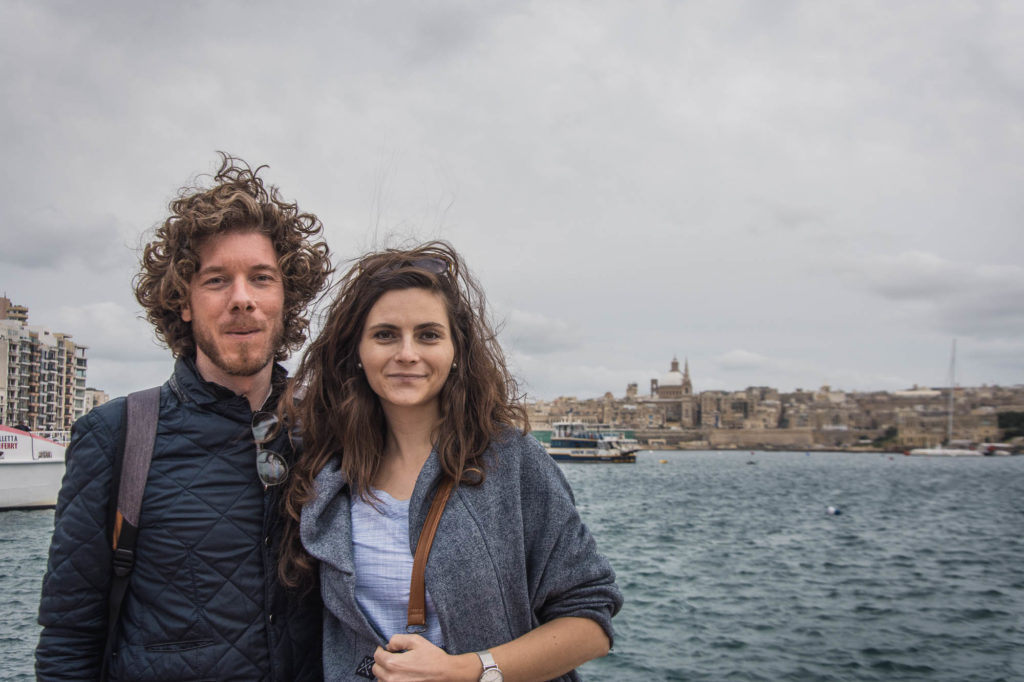 First day with our rented car, we left early morning towards the ferry terminal to Gozzo. The ferry takes about 30 minutes and the island is very small so you can see many nice places in a day. Our first stop here was Victoria although we quickly noticed that there is not much to see except the Citadel, so we continued to a spectacular place Wied il-Ghasri.

The next stop was the salt fields Xwejni Salt Pans. Normally, people should not enter the salt fields, but we didn’t see the warning and so we could walk in between and make some nice photos with the golden shine of sun or reflection of clouds. From the salt flats, we continued to Ramla Bay, a beautiful orange color sandy beach. Pitty it was already cold and windy, otherwise, it would have been great to go for a swim here!

Later in the evening, we decided to check out the Azure Window Ruins and although the Azure Window is not standing anymore, you can still have a pleasant walk on the coast, listen to the waves hitting the shore and enjoy the sunset. Just a few steps from the shore, you can get to the Inland Sea, which again in the season must be great to explore on a kayak and enter the cave. 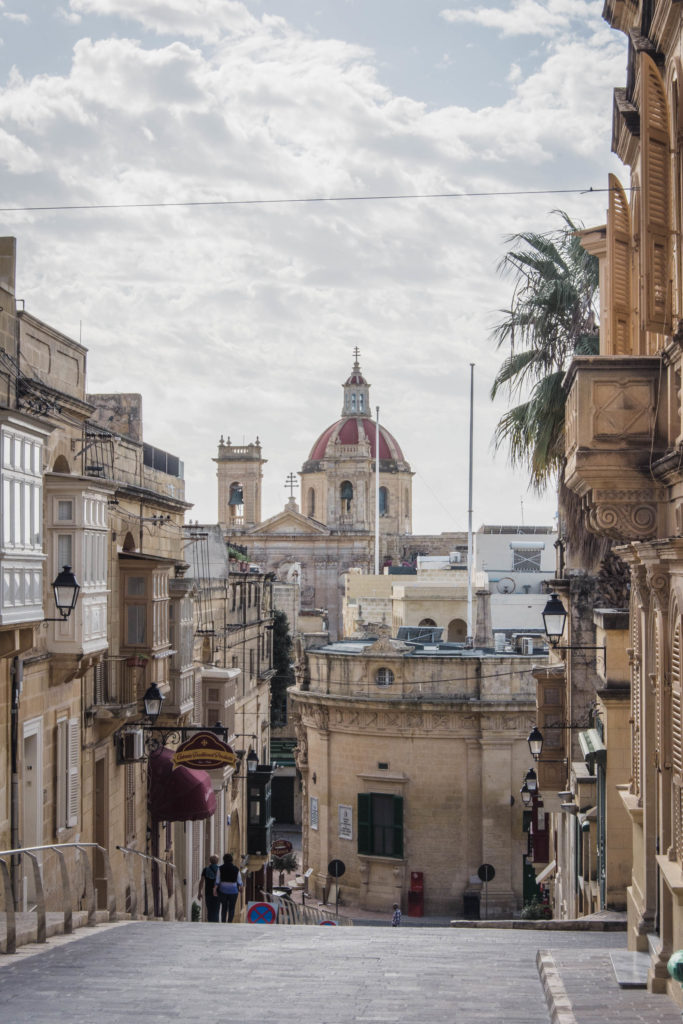 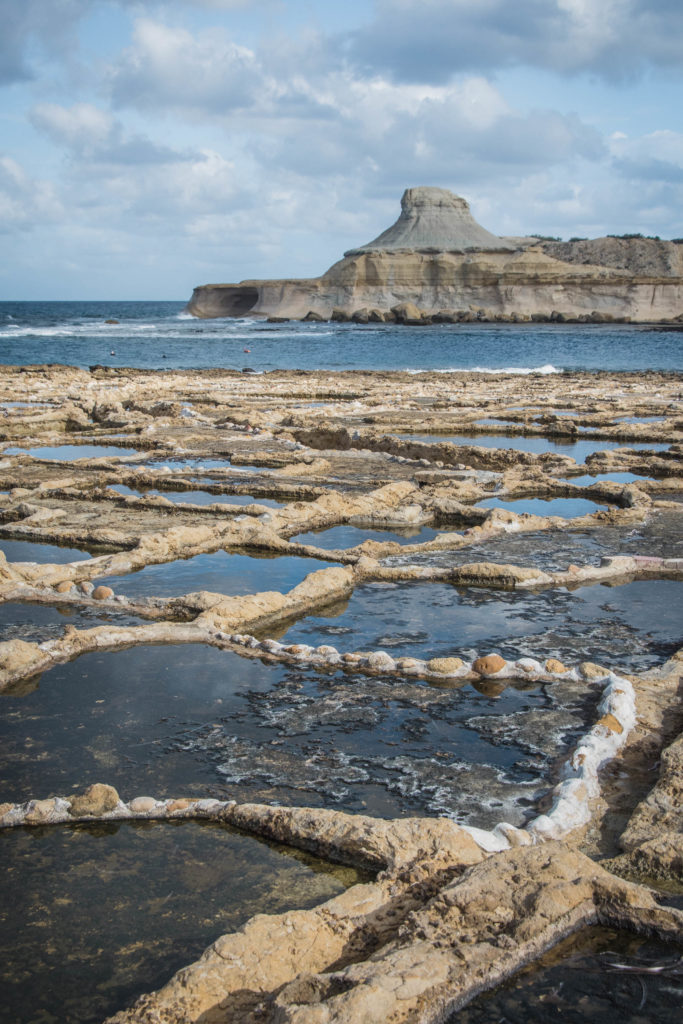 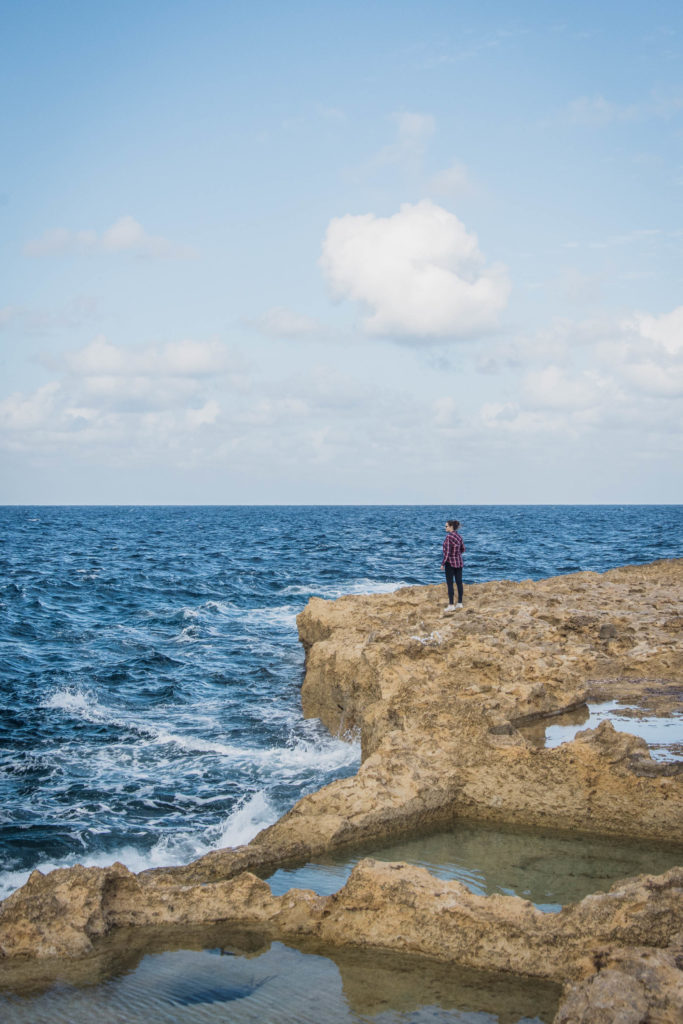 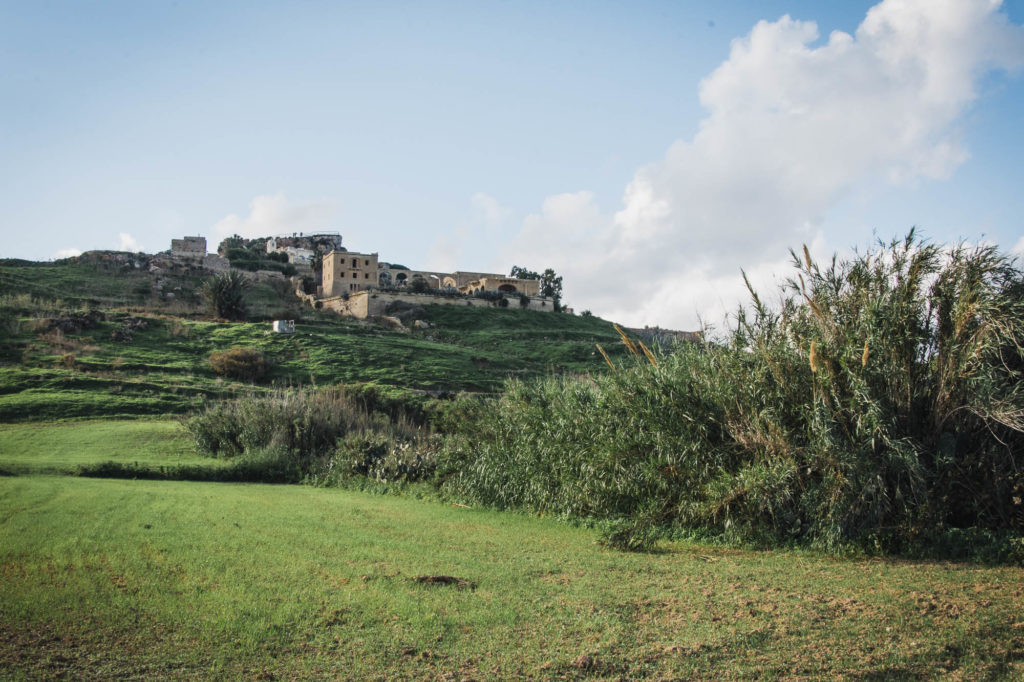 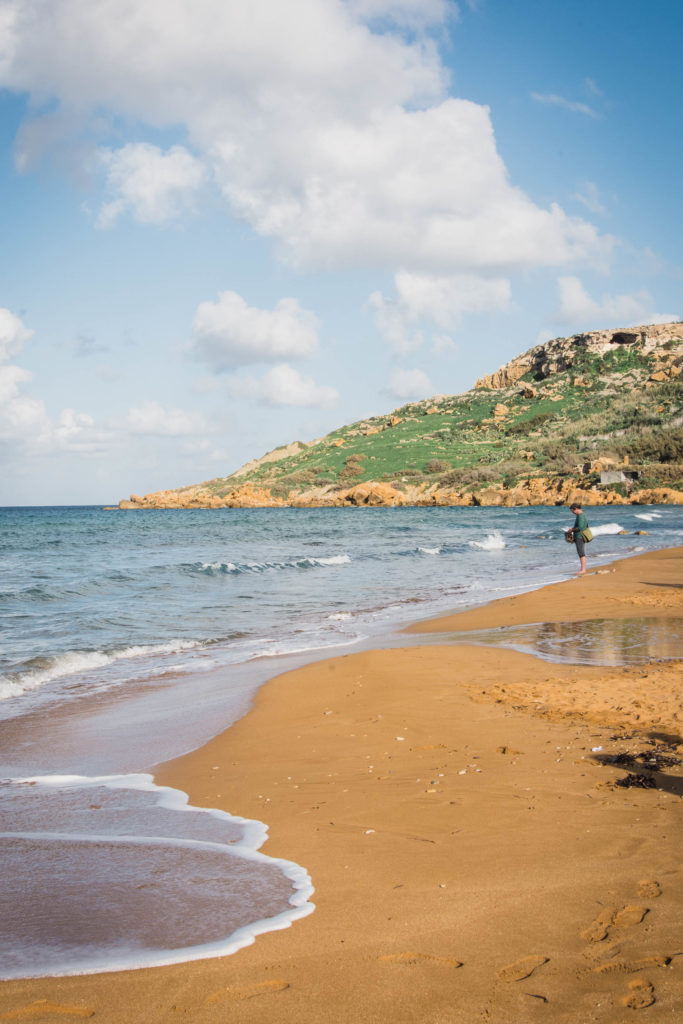 During our fourth day, we visited some interesting places on the Western Coast of the main island. We first drove to Blue Grotto which is an interesting rock formation on the South-Western coast. There is a viewpoint from where you can see the rock, and you can also take a boat ride in the caves with local fishermen, depending on the particular weather conditions. That day it was very windy so obviously, no boats were running.

We continued to Dingli Cliffs as we thought we could do a nice hike there. Unluckily, the wind was very strong and it just started to rain when we arrived. So we just had a short walk and drove back to M’dina to overcome the rain while having lunch although, in the end, we skipped lunch and had a tea with a piece of cake (delicious!) with a stunning view at Fontanella Tea Garden. and from there we decided to check out the impressive Rotonda in Mosta before the weather gets better.

From Mosta, we drove towards the Golden Bay. This is an amazing scenery of a beautiful sand beach with incredible views from the surrounding shores. Again a pity we could not go for a swim! Last stop of the day was the Popeye Village. We arrived just in time before the sun went completely down so that we could still see the beautiful color of the sea there and the cute little houses. 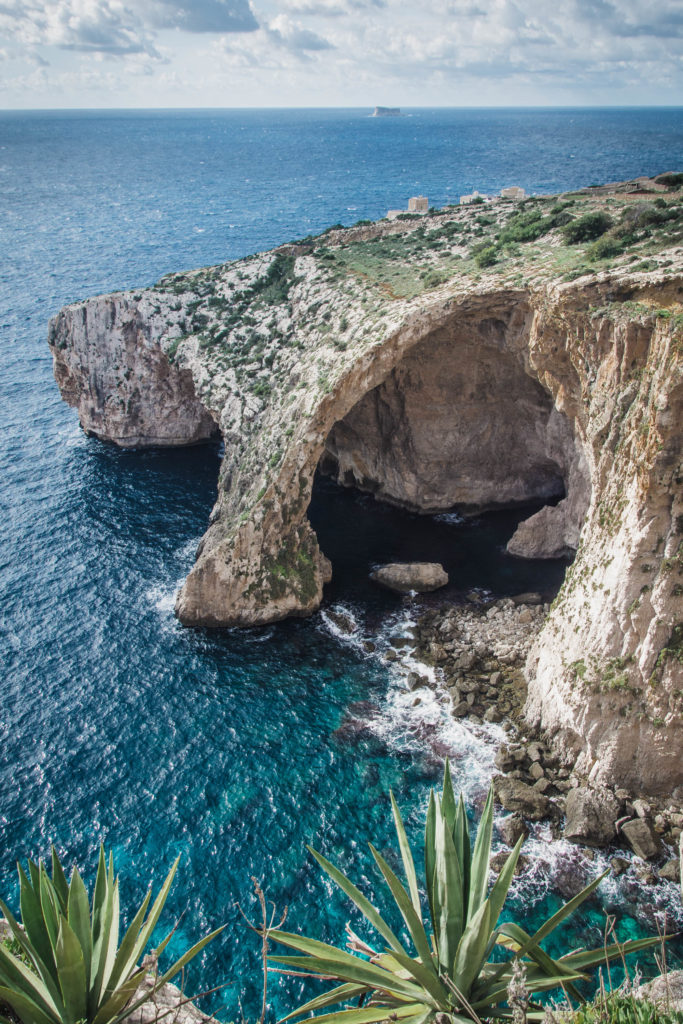 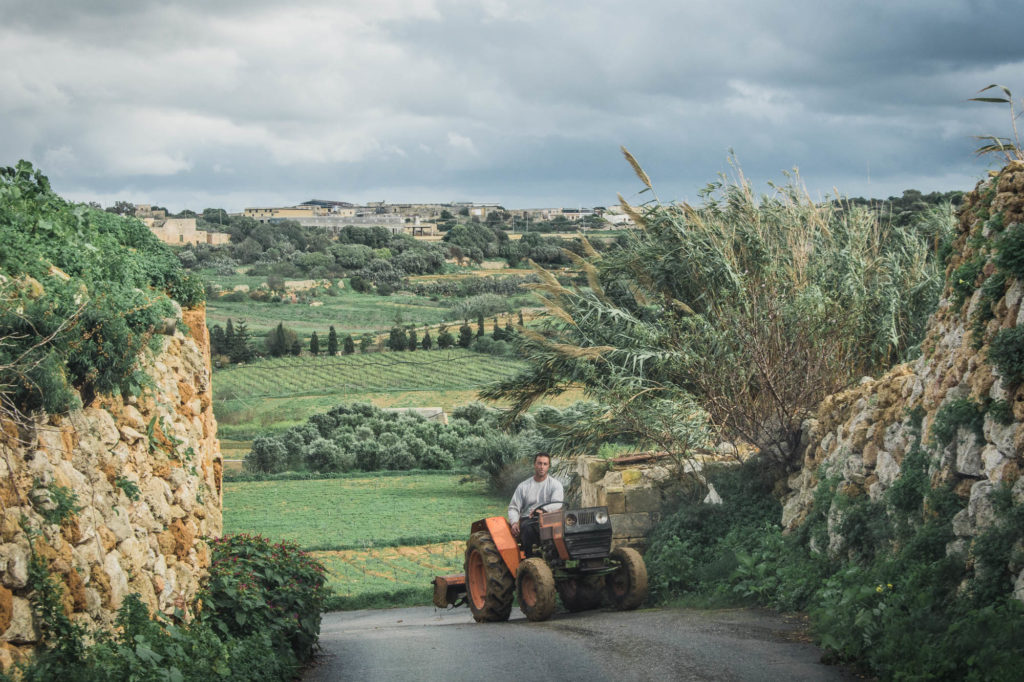 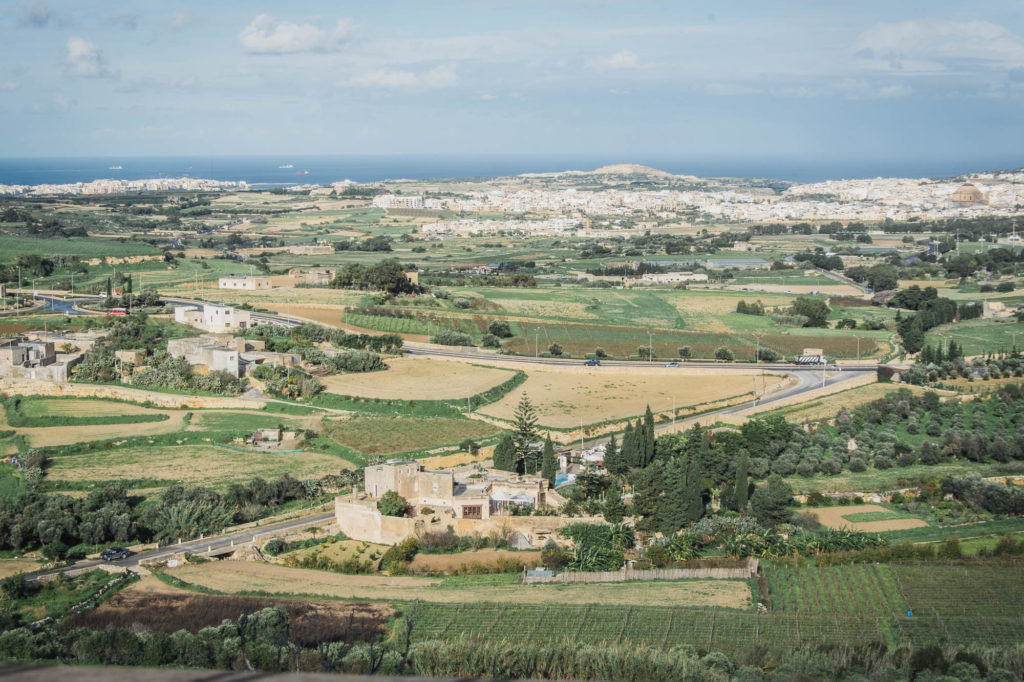 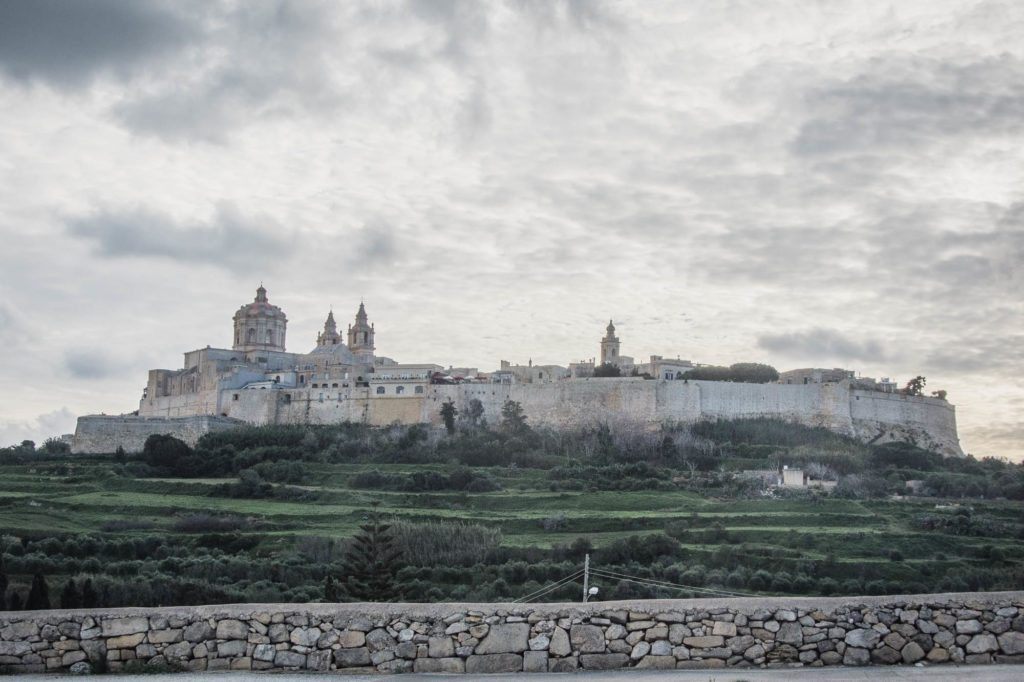 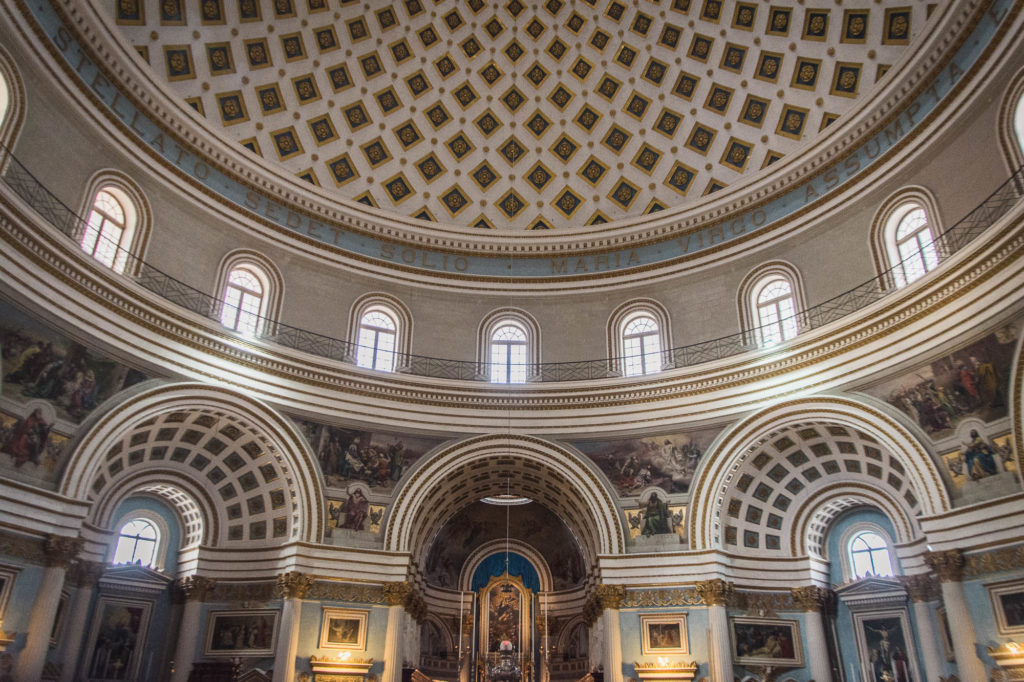 Our last day in Malta, we headed to the fishermen’s village Marsaxlox, located only a few minutes from the airport in Luqa. You can have a nice walk alongside the promenade and observe the colorful fishermen boats, and if hungry, you can stop by in one of the numerous restaurants and enjoy a fresh fish dish! From this peaceful village, we headed direction airport and wth recharged batteries, flew back to Belgium to face the winter.

That was our 5 days in Malta and I hope you enjoyed this post and our itinerary inspires you if you decide to go! Or have you been to Malta already and have any other tips for places to visit? Let me know in the below comments! I would also appreciate if you could share the post on social media.

This looks so pretty!! I have never been there and it just looks gorgeous

Your photos are truly incredible! I love how you put this piece together! It sounded like the most amazing trip!

Malta is gorgeous! Thanks for sharing!

I can sense some italy vibe in here.. those narrow streets and those cliffs are just eye-candy for me. Thans for sharing them. I might add them in my bucketlist hehe.

Yes, true! You can feel Italy in every corner in Malta! But much less touristy 😉 Hope you will make it to get there soon!

Wow! Beautiful place and your photos have done true justice to it. You are so talented!

Hi Aswathi, thanks so much for your lovely comment!

What an awesome trip that was! I am sure all your experiences will make you plan a return trip to Malta. It is truly beautiful there and your AirBnB accommodation is so pretty! Thanks for sharing your photos and for the virtual tour!

Thank you Krisine! Malta was indeed a truly unique experience worth repeating and the AirBnb was really an exceptional place!

Wow, those streets in Malta are absolutely charming and look like they belong in a fairy tale. I love the photo of you guys eating at the cafe in the street! Great photos!

All the pictures are very beautiful… Really great place..😍😍

oh my! it looks so very beautiful! I want to visit Malta one day

Oh yes, it is inspiring and I would love to go. I hadn’t had it on my bucket list before, but I certainly wouldn’t mind seeing it in person now.