This summer it has been 7 years since I landed in Belgium right after my graduation. My initial plan was to spend holidays here and to learn French. But I had no return ticket which caused that my two months´ holidays turned into a year, a year turned into two etc. you get the idea… If you read my blog from time to time, you probably know that the country of chocolate pralines and a various beers has adopted me. In order to celebrate my 7th anniversary living here, I would like to familiarize you with this country by listing some interesting facts about Belgium. Some of them may be known to you, but I bet there are many that you haven’t heard of! Are you ready? Let’s go!

Here are 25 Interesting Facts about Belgium

1. Belgium is one of the most liberal countries in the world. In 1990, the country accepted the abortion law and in 2002, euthanasia was legalized. And in 2003, Belgium was the second country in the world to legalize gay and lesbian marriage.

2. Thanks to the density of lights alongside the motorway network, Belgium is the most enlightened country in the world and therefore clearly visible from the Moon at night.

3. Belgium has more comic strip makers per square km than any other country in the world (including Japan). You may know Smurfs or Tintin which are probably the most known comic strip heroes. (If you are a fan of the comic strip, you will love the Comic Strip Walk in Brussels!)

4. The word spa comes from a Belgian town of Spa where the first health resort was opened in the 18th century.

5. The country produces around 800 different beers although this is only an estimation and some dispute for more.

6. The saxophone was invented in the Belgian city called Dinant in early 1840 by Adolphe Sax. 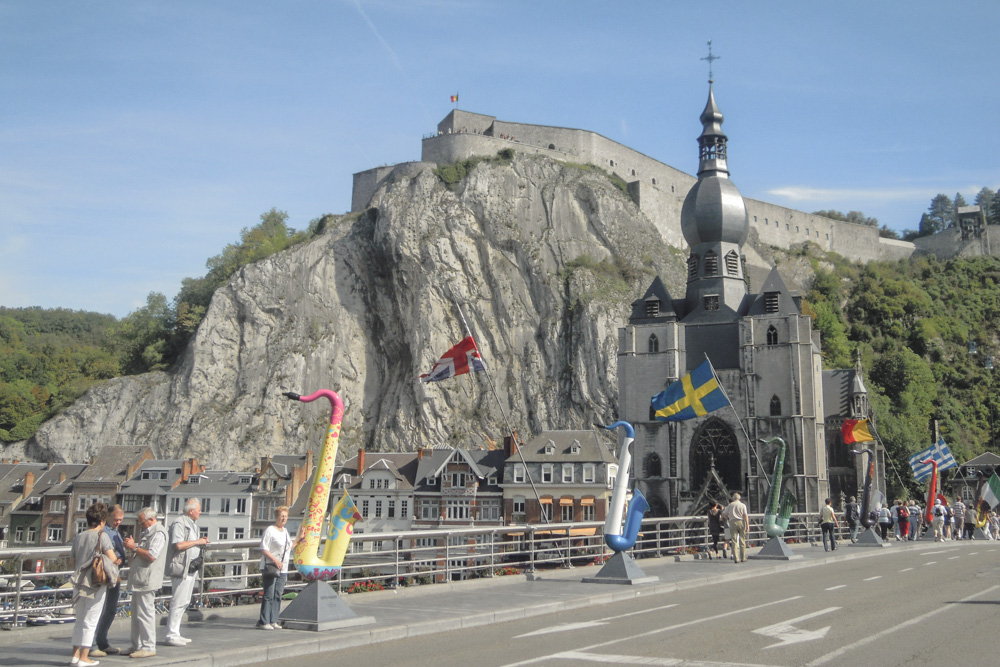 7. In 2010-2011, Belgium broke a world record in running a democracy without the official government for the longest period ever – whole 541 days. The reason was that the Flemish and Walloons were unable to discuss some political issues and form a coalition.

9. Antwerp is the world’s capital of diamond industry. Around 90% of all the rough diamonds pass through the Antwerp diamond district, where they have been traded since the 15th century. (More about the beautiful city of Antwerp in the previous post.)

11. The Belgian coastal tram (Kusttram) is the longest tram line in the world. Stretching from De Panne (French border) to Knokke-Heist (Dutch border), it has 68 stops and measures 68 km. (You can get some idea about the Belgian Coast here.)

12. There are around 3,000 castles in Belgium, from medieval fortress to residential castles. The castle density per square kilometer is higher in Belgium than anywhere else in the world. Many of them stay in private ownership though.

13. Belgium hosts the highest number of music and street festivals per year, including some that are known worldwide such as Tomorrowland.

14. Urban population in Belgium is over 97% which is the highest in Europe after Monaco. This can be due to the fact that the cities in Belgium are much closer to each other.

16. Voting is compulsory in Belgium as in only a few other countries worldwide.

17. Belgium has a long history in chocolate production, dating back to 1635. The country produces 220,000 tons of chocolate per year.

18. Fortunately, Belgians don’t eat it all! 🙂 Chocolate is also exported as a typical souvenir from Belgium. The Brussels’ Airport is the largest chocolate selling point in the world!

19. But rather than chocolate, the Belgian pralines made the country famous. Pralines were invented by Jean Neuhaus in Brussels in 1912. Neuhaus still belongs to the worlds’ finest chocolate brands.

21. You don’t want to marry a Belgian! The Belgian divorce rate is the highest in Western Europe and the country made it also to the worlds’ top 10 divorced nations. More than 30,000 Belgians sign divorce papers every year!

22. The world’s smallest town can be found… in Belgium! Durbuy was granted the status of a town in medieval ages and never lost it despite having only 500 inhabitants nowadays.

23. If you play billiard, you should know that 80% of all the Aramith balls are produced in Belgium.

24. The so-called BMI was originally invented by a Belgian statistician, Adolphe Quetelet, in 1832 as the Quetelet Index. In 1995, the WHO adopted the index of relative weight and renamed it to Body Mass Index in order to determine the level of obesity.

25. And the last fact which I bet Belgians aren’t proud of. Belgium provided the uranium for the A-Bomb that the Americans dropped on Hiroshima. The uranium came from Congo, their former colony.

I loved Brussels when I visited, and I did not know that thing about the castles! I am obsessed with them , so I will have to check this out. I recently wrote about the best castles or Airbnb and I saw some really charming estates in Belgium! Cheers!

I'm Michaela, a Czech girl living in Brussels, Belgium. Welcome to 1001 Voyages Gourmands - a blog celebrating tasty vegetarian food, charming places all over the world and our life in the country of chocolate pralines and beer!