Visiting the Grand Palace in Bangkok

The Grand Palace in Bangkok was built in 1782 during the reign of Rama I. and used to serve as a Royal Residence until 1925. It is a huge complex composed of various buildings and we started our visit at the Royal Chapel Wat Phra Kaew, also known as the Temple of Emerald Buddha, located in the Northeast part of the complex.

At the entrance, I had to borrow a long skirt for a small fee as my trousers were not long enough (they only covered my knees and as this is the most sacred place in Thailand, the rules are much stricter than in the other temples). But I was not the only one. Many tourists had the same problem (well one cannot walk the whole day in 40°C in long pants, right?). 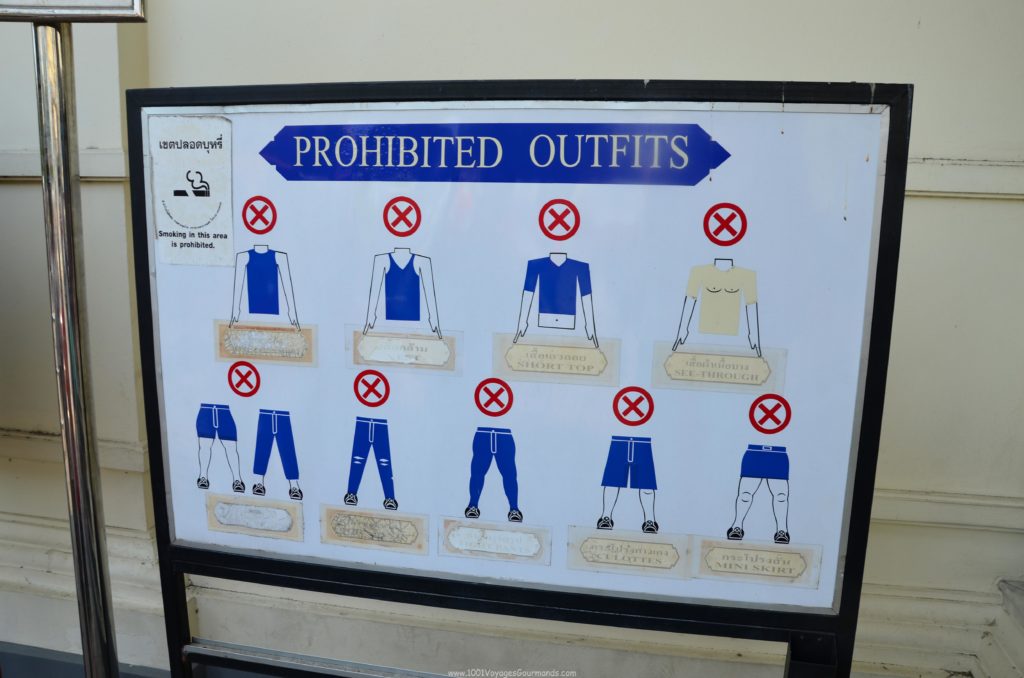 The Royal Chapel (Wat Phra Kaew) is the most sacred Buddhist temple in Thailand, particularly because it houses the most sacred statue of Thailand – 66 cm tall dark green statue of Emerald Buddha (this is where its name comes from). The statue sits on a golden altar and at the beginning of each season, the king himself changes the clothes. There are no pictures allowed in the temple, so you will not see here the statue on my blog.

Upon the entry to the site, we could admire gallery with wall paintings covering themes from Ramakien (Thai version of Indian Ramayana epic). 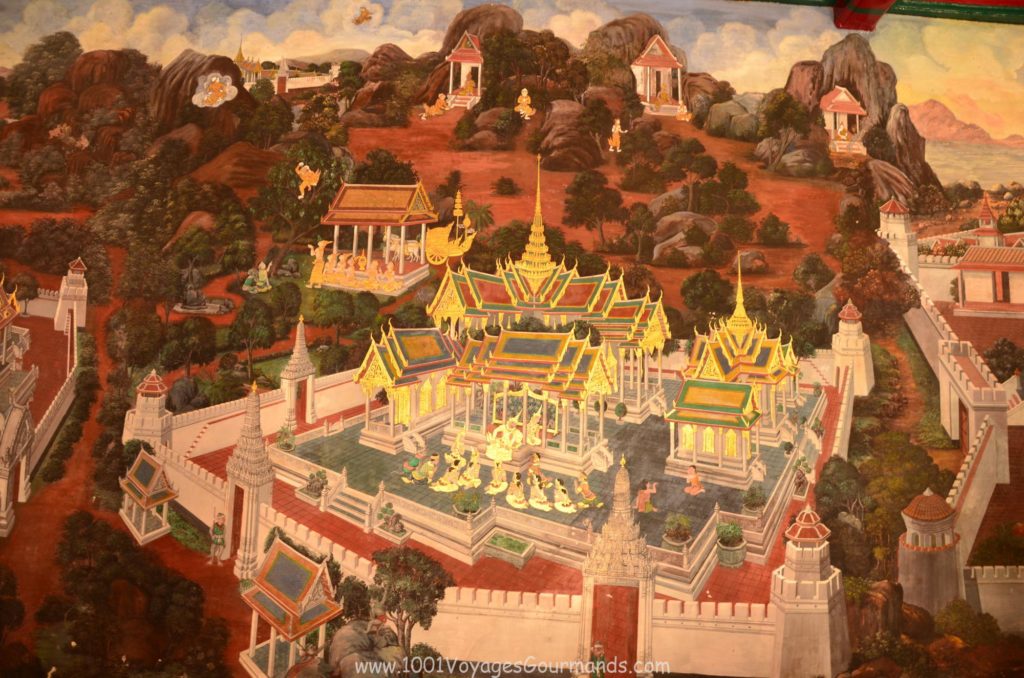 If I should describe this place with only one sentence, then I would probably say something like your eyes are spoiled here by the beauty or architectural style of old Bangkok, golden color and all the colorful details.

I loved those Garuda decorations on the external walls of the Royal Temple. (Garuda is a humanoid bird occurring in Buddhism as well as Hinduism) 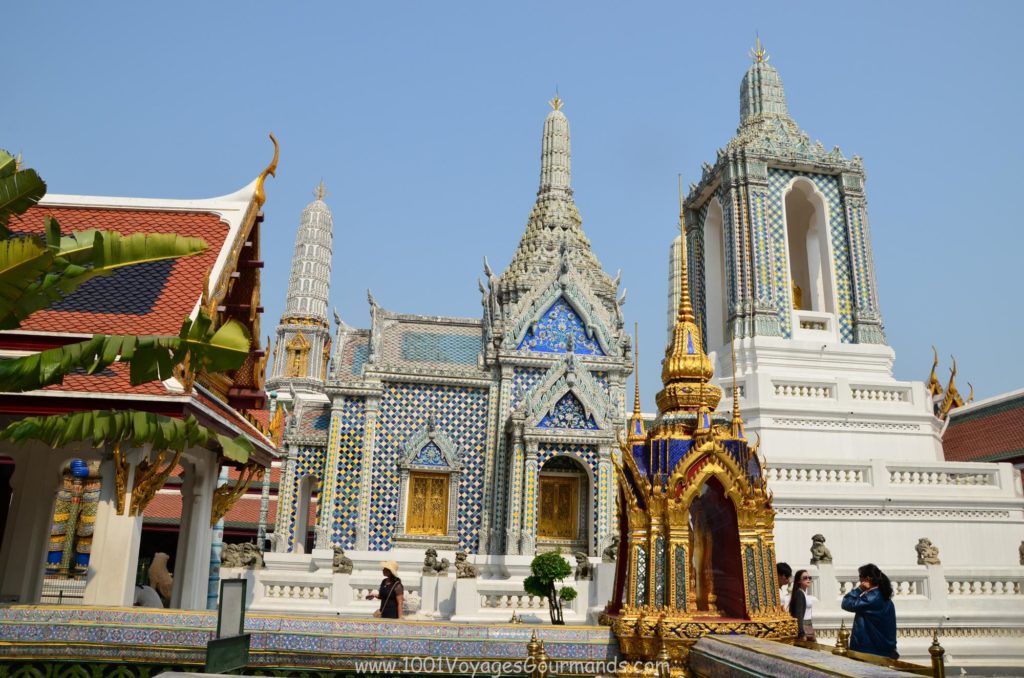 The Royal Pantheon (Prasad Phra Thepbidon) was built in the first half of 19th century during the reign of Rama IV., who wanted to place the Emerald Buddha here. Unfortunately, he died before the works were finished and Rama V. found the Pantheon too small for Emerald Buddha so the statue stayed in the Royal Chapel. Today the Royal Pantheon houses 8 life-size statues of kings from Chakri Dynasty and is not accessible for tourists – it is only open once a year, on the Chakri Dynasty Day on the 6th April, and only the Royal family can access it.

Two golden chedis (pagodas carrying relics) in front of the entry to Pantheon are decorated with colorful statues that make the impression of carrying the chedis.

Pantheon is guarded by gold-plated statues of half-human and half-bird figures (kinare). 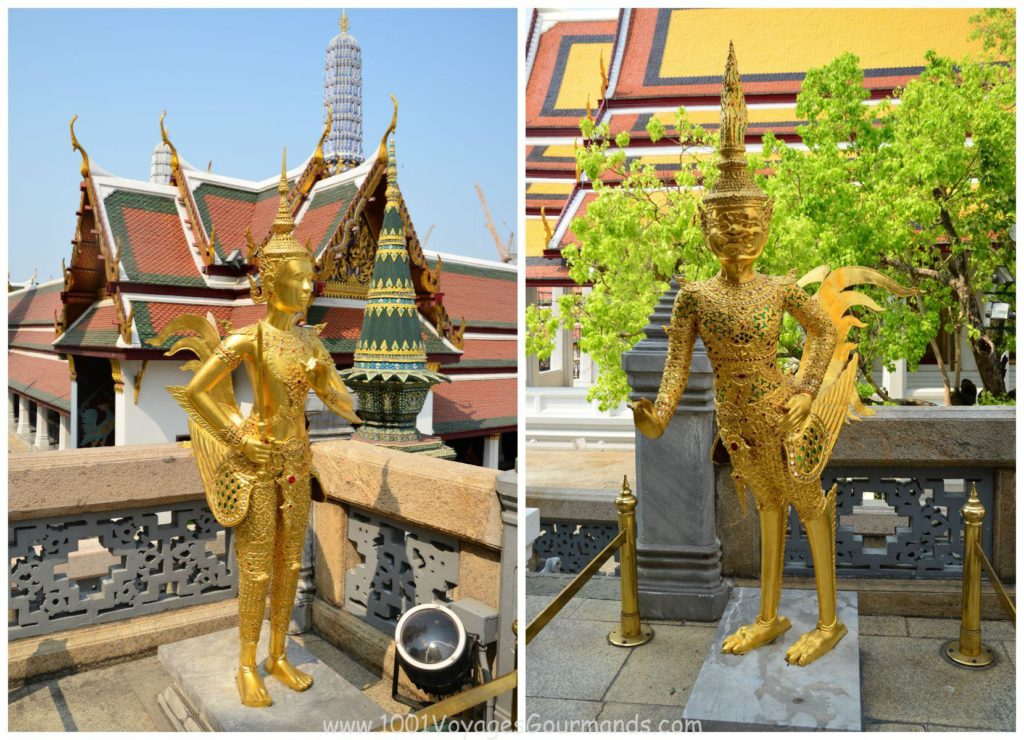 Library (Phra Mondop) in Thai style built by Rama I., is dominated by a huge door in Ayutthaya style. The library hides Tripitaka (old Buddhist manuscripts) and pictures of kings from the Chakri Dynasty.

Phra Si Rattana Chedi is a pagoda in Srí Lanka style, built in the first half of the 19th century during the reign of Rama IV. This is the most sacred place of Wat Phra Kaew as it carries Buddha’s relics.

We can also find a model of Cambodian temple Angkor Wat, that symbolizes a certain power of Thailand over Cambodia which was about to be colonized by France.

There are many elephant statues in the complex. Those symbolize independence and power.

We are leaving Wat Phra Kaew and moving direction the Grand Palace, where we can admire 4 main buildings: 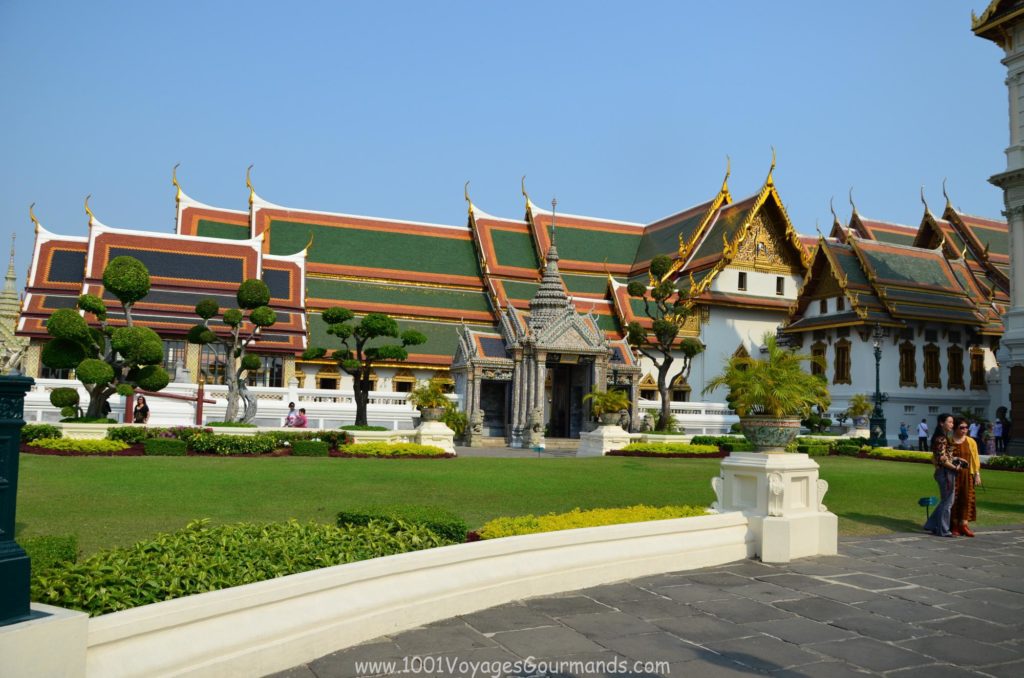 Chakri Maha Prasad (Throne Hall Chakri) is a bit different on the first sight, as it was designed by British architect during the reign of Rama V. who admired European architecture. But after some disputes, a Thai style roof replaced the original one in order to reflect Siamese motifs. Inside, there is a collection of ancient weapons.

Aphornphimok Pavilion is a small beautiful pavillon that served as a changing room for the king.

Dusit Maha Prasad (Throne Hall Dusit) is an audience hall with original monther-of-pearl throne of  Rama I. You can also see mother-of-pearl bed that served for relaxing between audiences.

We are leaving Grand Palace amazed and enriched and we heading direction Wat Pho.

If you like Thailand, do not miss one of my next posts about islands in the Andaman Sea or Ayutthaya (ancient capital of the Siam Kingdom).

Avocado Cream with Cashews and Cranberries