Salar de Uyuni spanning 10,582 square kilometers in the southwestern Bolivia is the world’s largest salt flat and one of the most surrealist places on the Earth. This entirely flat salt desert lies 3,650 m above the sea level which makes it also the world’s highest salt flat. It is one of the most beautiful places to see in the whole South America and a perfect place for photographers who like to play with perspective. If you go in the dry period, you will feel like visiting the North Pole, even the temperatures are quite ok, while after rain in the summer, you might experience the largest natural mirror in the world. We visited Salar de Uyuni in November 2015 and this post is about the first day of our 3-day Salar de Uyuni tour. If you are looking for some practical information and tips, read my Quick Guide to Salar Tours. 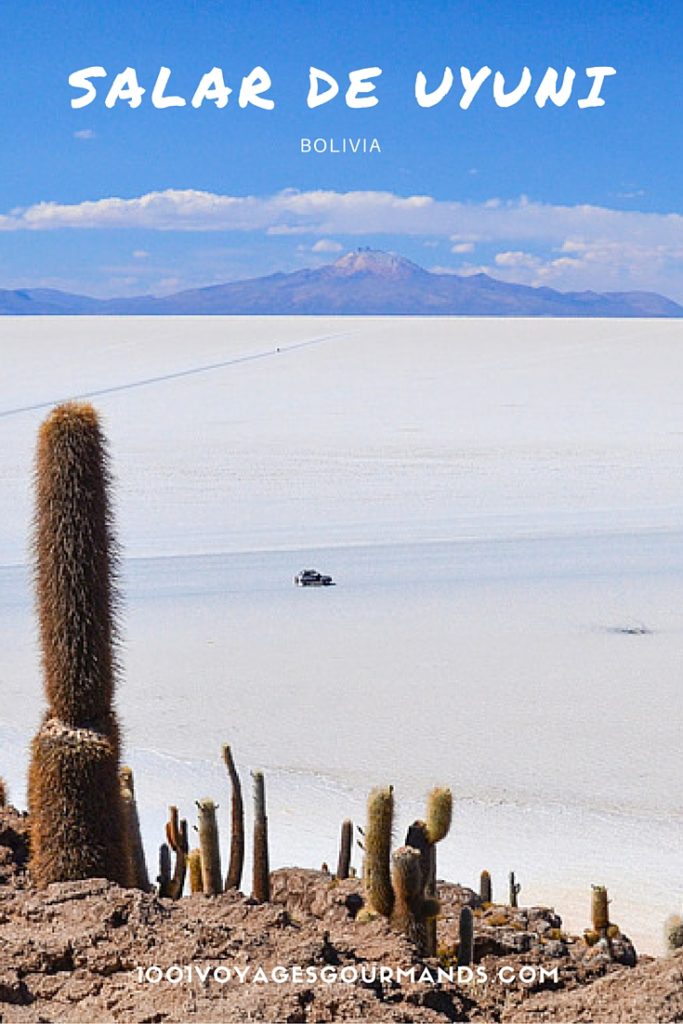 In our guide, Uyuni was described as an apocalyptical village from where there is no return. After the night spent on the bus from La Paz, we arrived in Uyuni around 6 a.m. and it is true that at that time, the village looked sadly empty, even abandoned. And still I think that we were lucky that we arrived in spring because during winter, it can be really cold here in the night and so early morning (probably because Uyuni lies in 3,650 m above the sea level).

After the door of the bus opened, all the people from the bus went to the only opened cafe for some warm drinks and breakfast. As the agencies open around 8-9, we really had enough time to chill in that place and meet some fellow travelers. After the breakfast, we took out our list of the agencies with our selection and walked the street to find them. Andes Salt Expedition was the first and last one that we visited as we directly booked our trip with them. To our surprise, one guy from Brussels that we already met on the bus appeared here together with a French couple from Bordeaux, and we also got the 6th person – a Portuguese girl who booked the trip via the internet. And so we formed a very nice group for the next three days to be spent on the road.

We loaded our bags on the roof of red Toyota 4×4, got in the car and left Uyuni at around 10:30. Our guide, driver, mechanic, and a cook called Lorenzo was a cool man, always smiling and laughing, especially when he said something that nobody understood. He had a CD with old disco hits in his car that we were obliged to listen to all around during the three days as nothing else worked for the music in the car. Unlike some other drivers of other agencies, we never saw him drinking alcohol. He (or his wife?) cooked very good, he stopped at many places, allowing us to take as many pictures as we wanted, and he was an excellent wake-up man when pointing on each sleepy face with a flashlight calling loud the names. 🙂 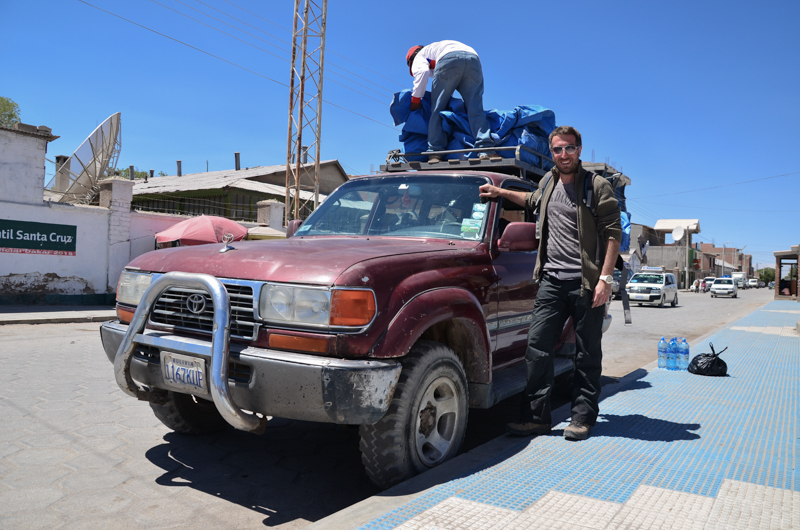 The tours usually start with a visit of the train cemetery that lies only about 3 km from Uyuni. The so-called Train Cemetery or Cemetario de trennes consists of few rusty and decrepit steam locomotives that used to transport mined material to Chile and Brazil in the first half of the 19th century. The trains were abandoned here after the mining industry collapsed in 1940 and are nowadays an interesting spot for tourists hungry for interesting pictures. Our guide book killed it again with a term something like Mad Max. I wouldn´t really care about locomotives, but I must admit that they really do look good on pictures. 😉

We continued to a tiny village called Colchani. This is really a place where the time has stopped. We saw empty cars that used to transport the salt or other material, empty-looking houses, few merchants with handmade goods and souvenirs and a mini museum with statues made of salt.

Sandy and dusty landscape was slowly changing into an almost white salt desert. Unfortunately during the last days, the wind has brought some sand to dirty the salt so that’s why the landscape was not so white as we had imagined. Our first stop on the salt flats was on a place where the salt from waits for transport to the surrounding villages. These salt cones are built here by the workers who are paid less than you can imagine – 6 Bs for 1 ton of salt. Due to the sun, they need to cover their head and wear black glasses, they have their hands and legs burned, corroded from the salt. 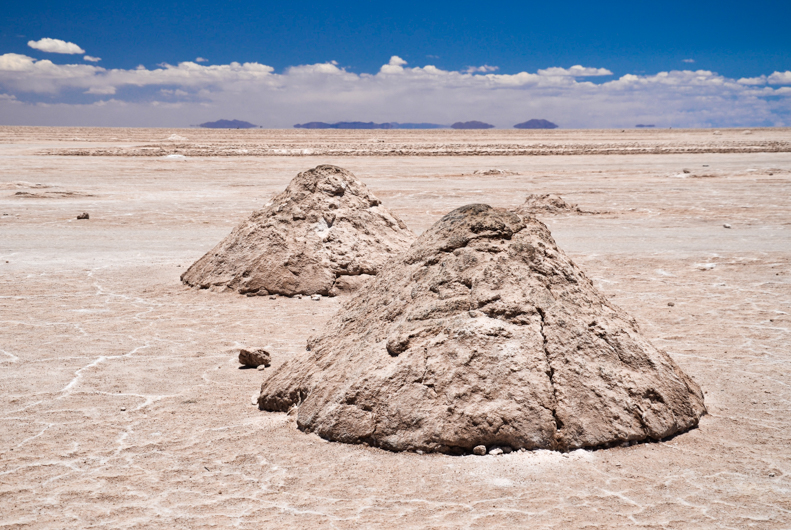 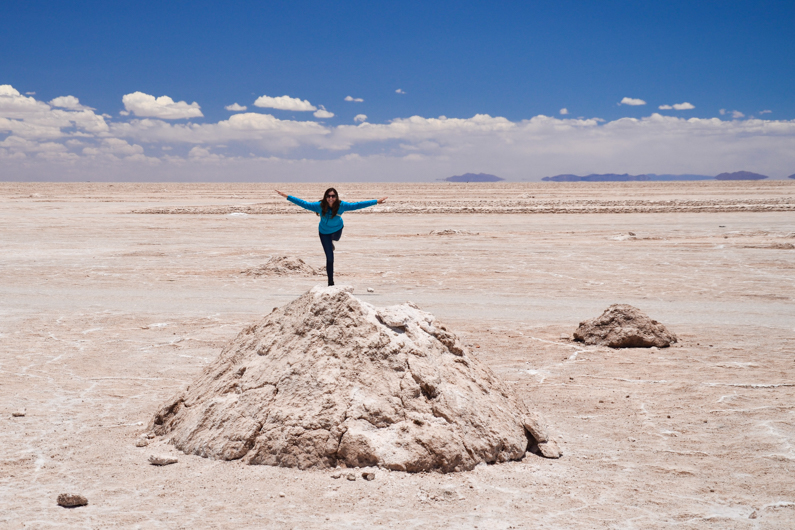 These are ojos de sal – deep holes from where the sulphur escapes from the volcanoes. 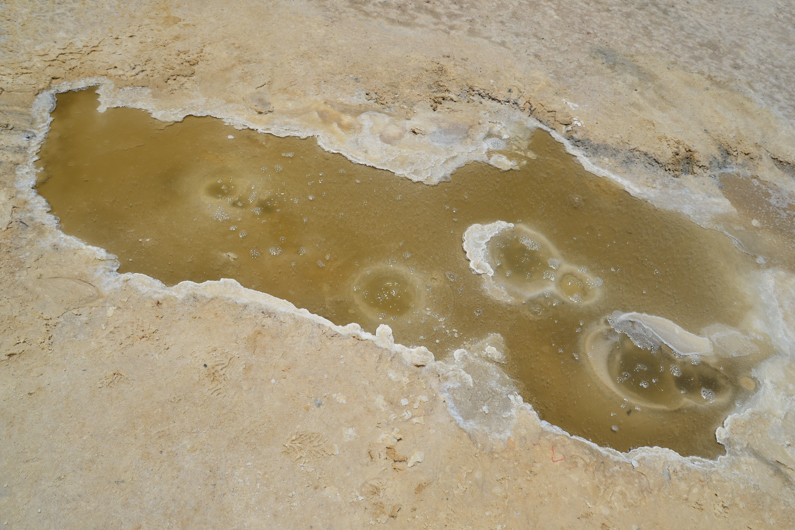 We got on the car and moved to something that started to look like a salt desert as we know it from National Geographic and travel blogs. Wow! Hallucinating flat landscape, just white and blue around us. While walking, the ground beneath our feet full of beautiful geographical shapes makes a similar noise to the one of a snow crust on a frozen lake. 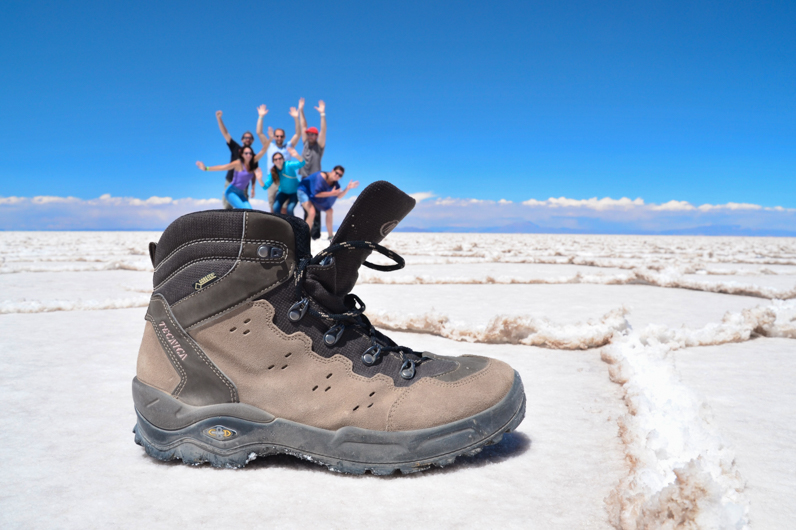 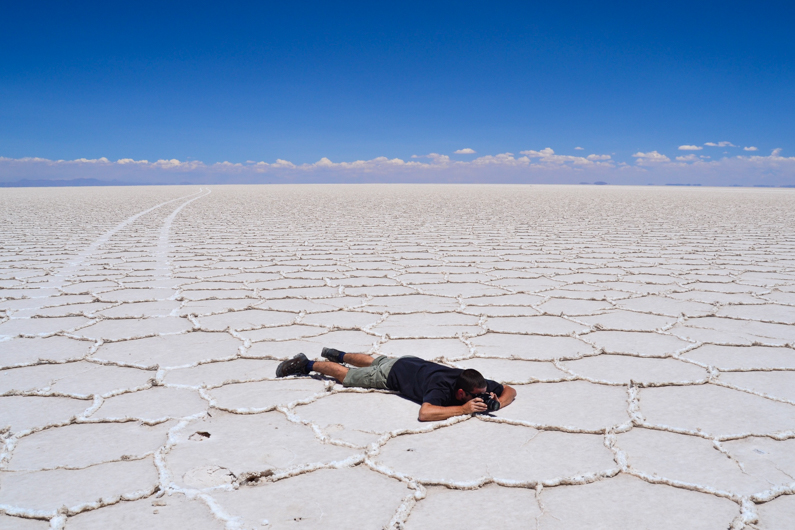 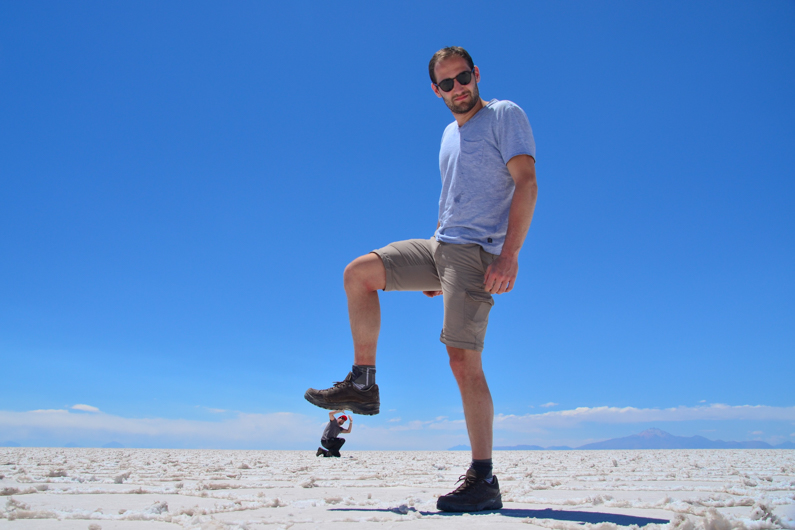 It is here where Lorenzo opens his magic trunk and serves us the lunch. They all had llama except me – as I took the vegetarian option, got an omelette with quinoa and veggies. Don’t know about the llama, but mine was delicious!  🙂

The salt flat was formed from a large prehistoric salt lake that covered most of the southwest Bolivia at that times and so there are still some islands that breach the otherwise entirely flat surface of the white salty landscape. Isla Inca Huasi full of giant cactuses and relics of corals is one of such islands. After we paid the entry fee of 30 Bs, we had a 45-minute walk around and really enjoyed the view from the higher points of the island. There is also a mini-museum of traditional ceremonies and a tiny pub where you can have a beer.

After the visit of the Inca Huasi Island, Lorenzo took us on few places on Salar de Uyuni just to take some more pictures. There was a relatively smooth surface which allowed us to take pictures while playing with the perspective. During the rainy days, this place turns into the largest mirror on the Earth, when the sky reflects in the water on the ground. 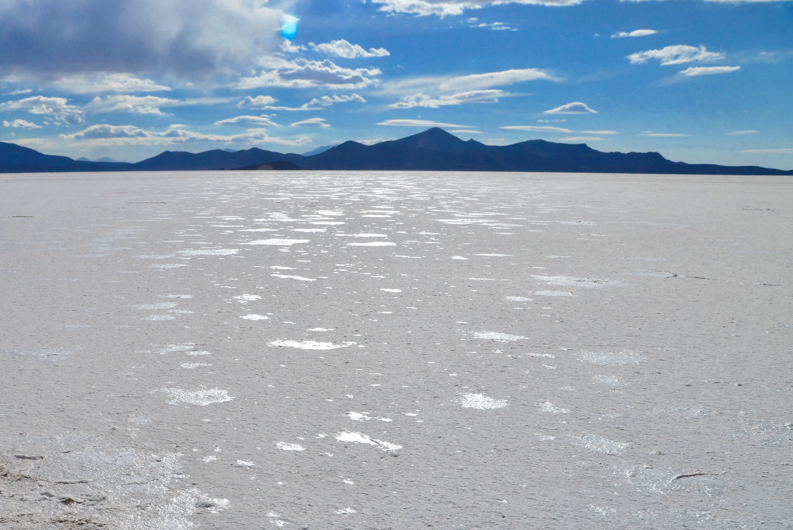 Once we left the salt flats, the landscape slowly changed into a desert with volcanoes. 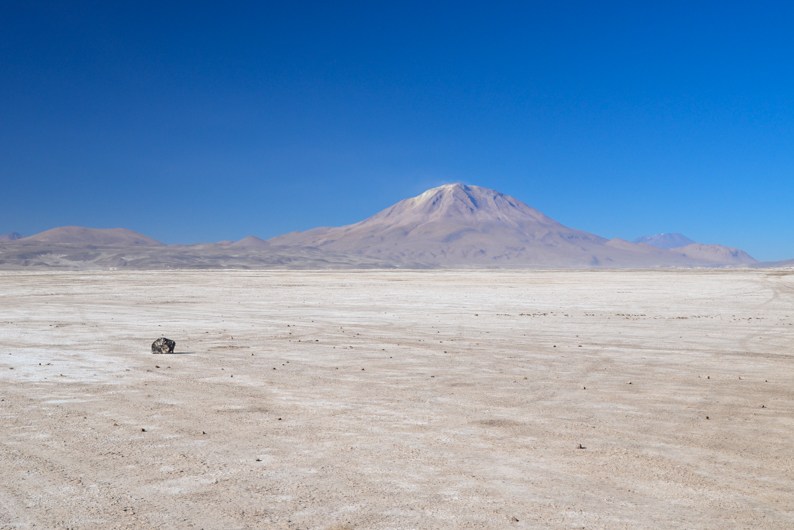 In the evening, we arrived at kind of salt hostel in San Juan. The walls and the floor were made of salt, not sure about the roof, though. They welcomed us with tea and cookies, we took a shower and had a dinner that again Lorenzo or his wife prepared. After the dinner, we left to look for a bar that we never found. Different people we asked, sent us to different directions. As it was already late and dark, we decided to get some sleep instead in order to be fresh for the adventures in Sud-Lípez, about which I’ll write in the next post! 🙂

Read next: Sud Lípez: From Colorful Lagunas To Geysers and Dali´s Desert

The first day of our trip was an unforgettable experience. But as we read later in the guide and on the internet, apparently there is a real danger for Salar de Uyuni. Below the salt crust, over 50% of the world’s stock of lithium can be found and if one day this is exploited, Bolivia would become a rich country. Although it is a protected area and the necessary infrastructure has not yet been built here, the current government plans to explore the area deeper in the near future. It is clear that factories and roads would harm this beautiful landscape.

Have you ever been to Salar de Uyuni? What were your impressions?